VIDEO – Part 2 – As Leaseweb founder and CEO Con Zwinkels invited HostingJournalist.com to come fly with Leaseweb in their own Extra 330LT aerobatic airplane, Koen Stegeman – HostingJournalist.com’s Editor-in-Chief – took the opportunity to go fly with this global IaaS cloud hosting provider and feel the company’s passion for flight technology from up close. 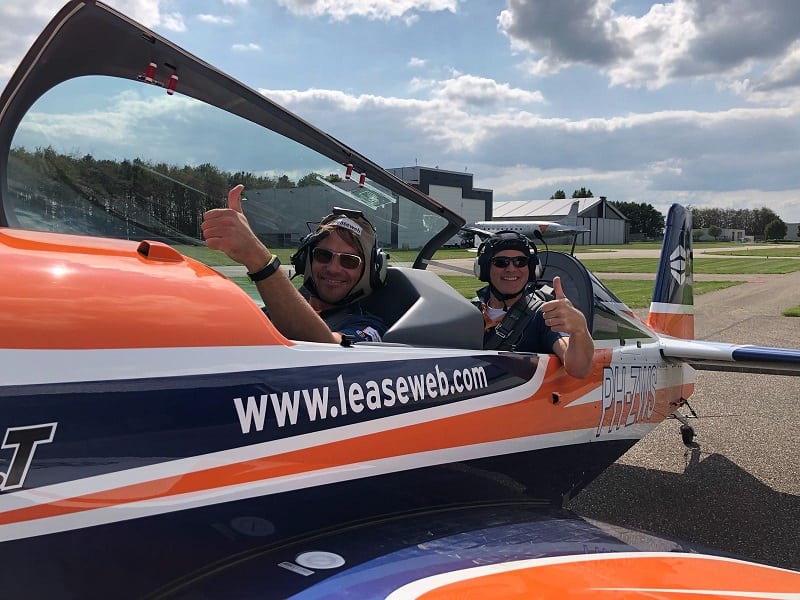 At the Leaseweb Texel Airshow last month with HostingJournalist.com attending it was obvious, Leaseweb as a company is passionate not only about globally delivering hosting technologies such as private and hybrid cloud, dedicated servers, load balancing, virtual servers, CDN, firewalls, DDoS protection, and so on, they’re also into aviation and flight technology. Another airshow being sponsored by Leaseweb for example is the Manassas Airshow in the City of Manassas, Virginia. This passion for aviation is something Leaseweb inherited from its founders’ previous jobs. As captains of large Boeing airplanes they flew passengers and cargo loads across the world, from Europe to the Americas and Asia, back and forth.

Leaseweb’s own company airplane, the Extra 330LT – made for extreme aerobatics such as loopings, hammerheads, rolls, and more, is also part of the company DNA. This aircraft is used by Leaseweb to share its founders’ passion for flight technology with others – and take customers, business partners, and a media outlet like HostingJournalist.com to the clouds, literally this time.

It was a sunny day when Paul Reijnen was awaiting Koen Stegeman. It was quite warm, with only a few clouds up in the air. Mr. Reijnen – a KLM Boeing 747 pilot – replaced Leaseweb founder and CEO Con Zwinkels who is flying the Extra 330 himself from time to time (only when he’s not too busy managing the company).

HostingJournalist.com’s Editor-in-Chief took his family including three kids to watch him go up. “To be honest, I felt a bit of hesitation when thinking of stepping into an aerobatic airplane, and so did my wife (and kids),” said Koen Stegeman. “Once at the airport when seeing the aircraft and things getting prepared for the flight, these feelings were gone completely. Afterwards also my wife had to admit that her fear was unfounded and that the pilot flying this Leaseweb aerobatics aircraft really knows what he is doing – logging his information and all, and checking all things twice or more to ensure a truly safe flight.”

“It was definitely not on my bucket list, doing loopings, rolls and hammerheads in an aerobatic plane,” added Mr. Stegeman. “But I’ve added it to my bucket list retroactively. I thought I might need a vomit bag to endure the flight, but my stomach kept really well and I had a smile on my face from beginning till the end of the flight. Well, that’s to say, sometimes the gravitational forces prevented me from smiling, as my cheeks were pulled towards my knees during the loopings. Paul even let me steer the aerobatics machine and do some rolls myself. Pulling the aircraft a bit up in a (small) cloud, and then steer it to the left in a roll. Awesome. Thanks Leaseweb and thanks Con Zwinkels (ed., in the intro of the video) for inviting me, and a whole lot of thanks to Leaseweb pilot Paul Reijnen for bringing me back to earth safely, also on behalf of my wife and kids. I really had a great time up there in the clouds, it was a truly awesome experience. Would do it again, no doubt.”

Also read part 1, with Koen Stegeman preparing for take off.

Getting worked up about your goals for OpenStack Cloud | Rhetorical...

Las Vegas Invests in the Future

How to assess Azure ARM Template compatibility with Azure Stack

Bringing Clients to the Cloud How to Provide Proof of Value