Cloud hosting provider, Amazon Web Services (AWS), has been named a Platinum Sponsor of SharePoint Fest Seattle to be held at the Washington State Convention Center in Seattle, Washington, August 18-20, 2015.

SharePoint Fest is in its fifth year. It offers a two-day conference (with an optional workshop day) that brings together SharePoint enthusiasts and practitioners, with many of the leading SharePoint experts and solution providers in the U.S. 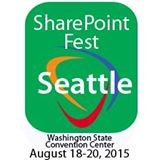 Conference delegates will hear from keynote speakers and attend breakout sessions. Over 70 sessions will be offered across multiple tracks, as well as an optional day of workshops preceding the conference. There will also be a networking reception held at the end of the first day of the conference.

At SharePoint Fest – Seattle, there will be sessions created for SharePoint administrators, software developers, business analysts, information architects, and knowledge workers, which would ensure that attendees walk away with as much knowledge as they desire to truly leverage SharePoint in their current environment.

The announcement follows the news that AWS will open an AWS infrastructure region in India for its cloud hosting platform in 2016. AWS recently also announced the call for entries for its second “City on a Cloud Innovation Challenge,” a global program to recognize local and regional governments and developers that are innovating for the benefit of citizens using the AWS Cloud. AWS and a panel of worldwide experts will award a total of $250,000 in AWS credits to eight grand prizewinners.