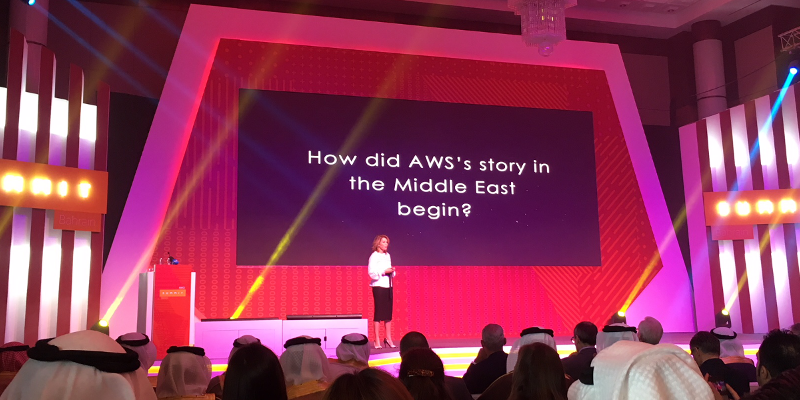 VIDEO – With the launch of a new cloud region in the Middle East, in Bahrain, AWS now spans 69 Availability Zones within 22 geographic regions around the world. The hyperscaler has announced plans for nine more Availability Zones across three more AWS Regions in Indonesia, Italy, and South Africa.

“The cloud has the chance to unlock digital transformation in the Middle East,” said Andy Jassy, CEO, Amazon Web Services (AWS). “Today, we are launching advanced and secure technology infrastructure that matches the scale of our other AWS Regions around the world and are already seeing strong demand in the Middle East for AWS technologies like artificial intelligence and machine learning, data analytics, IoT, and much more. We are excited to see how our cloud technology will provide new ways for governments to better engage with citizens, for enterprises to innovate for their next phase of growth, and for entrepreneurs to build businesses and compete on a global scale.”

AWS Regions are composed of Availability Zones, which each comprise at least one data center and are located in separate and distinct geographic locations with “enough distance to significantly reduce the risk of a single event impacting business continuity, yet near enough to provide low latency for high availability applications.”

Each Availability Zone has independent power, cooling, and physical security and is connected via redundant, ultra-low-latency networks. AWS customers focused on high availability can design their applications to run in multiple AWS Availability Zones to achieve greater fault-tolerance. AWS infrastructure Regions would meet the highest levels of security, compliance, and data protection.

“Emirates NBD has been collaborating with AWS and taking advantage of AWS’s technologies and innovation practices to develop personalized, real-time banking experiences,” said Abdulla Qassem, Group Chief Operating Officer, Emirates NBD. “The new AWS Middle East Region will allow us to further experiment and enhance our solutions as we continue to realize our vision of being the region’s most innovative financial services organization that is making banking more easy and intuitive for customers.”

Emirates NBD is a United Arab Emirates (UAE) based banking group with total assets of AED 537.8 Billion that is working with AWS to build an Artificial Intelligence-enabled bank of the future. The banking group has a significant retail banking presence in the UAE and is a participant in the global digital banking industry. The bank is utilizing AWS’s artificial intelligence and machine learning services, data analytics, and natural language processing technologies to better engage with customers and simplify banking.

Another regional enterprise moving to AWS is Al Tayer Group, one of the largest privately held family-run conglomerates in the MENA region. Al Tayer Group has interests in automobile sales and services, luxury and lifestyle retail, and hospitality. Headquartered in the UAE, the group operates in 12 countries in the Middle East and manages over 200 stores.

“Today’s news from AWS is fantastic as we continue accelerating our cloud adoption,” said Mohamed Al Fayed, Senior Vice President of OmniChannel, Al Tayer Retail. “Using AWS, we were able to become more agile and reliably launched five e-commerce platforms, such as Mamas & Papas, Nisnass.com, and Ounass alongside Android and iOS apps, all within a year. We rely on several AWS managed database services such as Amazon Aurora, where we were able to cut costs by 40 percent, while increasing performance by four times, compared with proprietary database technologies. We also leverage AWS spot instances to reduce operational cost by 79 percent. We see great potential to improve our business even further with the new AWS Middle East Region, which will enable us to serve our end customers with even lower latency.”

Also watch the following video, in which AWS CEO Andy Jassy sits down with Teresa Carlson, Vice President of Worldwide Public Sector at AWS, to discuss what it means to truly listen to the customer, turn failure into success, and the starting point for tackling complex social issues.

Gartner: Worldwide IT Spending Forecast to Grow 2.4 Percent in 2017