The British Army has migrated its private cloud environment to Red Hat Enterprise Linux and is using Ansible Tower by Red Hat for automation and orchestration. With Red Hat Enterprise Linux and Ansible Tower by Red Hat, the British Army would be able to deliver applications more quickly and efficiently, with less downtime, to better meet the needs of end users.

Headquartered in Andover, UK, the British Army has more than 19,000 soldiers deployed in commitments, in more than 27 countries across the globe. The Army’s Information Application Services (IAS) team delivers large corporate applications, hosting and web services that provide support to military families, veterans and more.

The IAS team has applications in production running on two main hosting environments: a joint server farm hosted in a private cloud, and a private hosting environment, which consists of two private clouds designated for secure data. Support and compatibility issues with the legacy stack resulted in unplanned downtime for upgrades and delayed updates though. That’s why the Army sought a solution that could not only deliver software more quickly and without downtime, but would also enable them to embrace DevOps methodologies.

The British Army migrated to Red Hat Enterprise Linux and moved from a physical infrastructure to a software-defined data center. Its main stack consists of five database servers and two applications servers, all of which have a central spine of a clustered file system. For this, the Army uses the Resilient Storage add-on for Red Hat Enterprise Linux, which would offer robust file system capabilities that enable users to access the same storage device over a network – using either shared storage or a clustered file system – through a pool of data that’s available to each server in a group.

To help with management, the British Army deployed Ansible Tower by Red Hat, initially using the enterprise-grade agentless automation platform to automate the installation of routine patches and configuration updates to Red Hat Enterprise Linux. The British Army has expanded its Ansible Tower implementation, now using it to provide rapid patching and system reconfiguration for urgent requirements, and to provide other DevOps functionality for routine system administration. 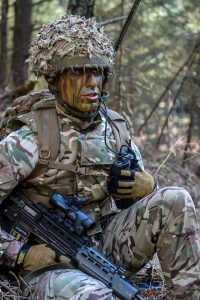 “We want to deliver software quicker and more efficiently to meet the end users’ requirements and we absolutely made the right choice with Ansible,” said Lt Col. Dorian Seabrook, head of Operations, IAS Branch, British Army. “It works for us on a number of levels, and the adoption throughout the organization is now starting to really take hold. Previously, communicating the delivery timescales for large projects could be quite stressful. Now, in most cases, we’re delivering quicker than the users can actually absorb the changes. Our users are just staggered by the agility and the turnaround time and what we can now offer them.”

With the new Ansible automation-based system, the Army has accelerated its pace of change by 75 percent. Upgrades that used to take a day can now be achieved with high availability in less than two hours, and can be scheduled after hours. Emergency patches that used to take approximately three days can be implemented in a matter of hours. Overall, delivering changes is now four times faster, on average, based on the British Army’s internal calculations. With the time saved from automating tasks with Ansible Tower by Red Hat, the Army has been able to reallocate people to other parts of the organization.

The Army plans to extend the DevOps capability provided by Ansible Tower by Red Hat, to include other platforms, as well as managing its network switches and servers.

Benefits of Cisco AMP for Endpoints

How to setup VPS Reseller Module in WHMCS

How to Login and Logout of WordPress – InMotion Hosting