Datadog, a monitoring service for dynamic cloud environments, has moved into The New York Times building as the company approaches 300 employees. The new space has nearly double the square footage of their former NYC headquarters measuring roughly 31,534 square feet.

Datadog was also included in the Forbes Cloud 100 acknowledging the leading private companies in the cloud sector alongside Slack, Dropbox, Stripe, SquareSpace and MailChimp. 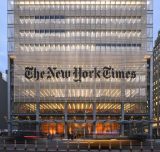 “As more and more companies look to Amazon, Microsoft and others to store and manage the data and computing that makes their businesses work, no company’s better positioned to track it all than New York-based startup Datadog,” writes Alex Konrad, staff writer for venture capital, startups and enterprise tech at Forbes.

The monitoring service for cloud-scale applications, Datadog, brings together data from servers, databases, tools and services to present a unified view of an entire stack. These capabilities are provided on a SaaS-based data analytics platform that enables Dev and Ops teams to work collaboratively to avoid downtime, resolve performance problems, and ensure that development and deployment cycles finish on time.

Since launching in 2010, Datadog has been adopted by thousands of enterprises including Airbnb, Twilio, Zendesk, Atlassian, and Warner Bros.

The New Firebase with Abe Haskins and Doug Stevenson: GCPPodcast 29