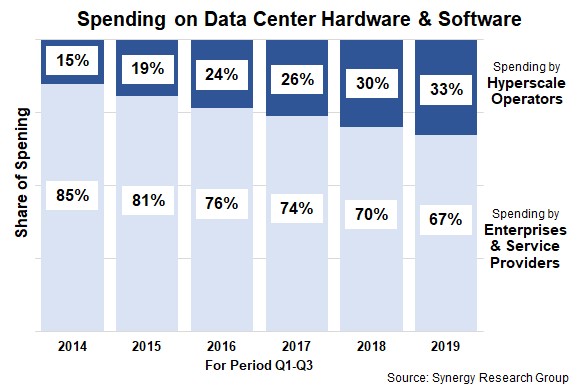 Hyperscale operators accounted for 33% of all spending on data center hardware and software in the first three quarters of 2019, up from 26% in Q1-Q3 of 2017 and 15% in 2014, according to Synergy Research Group. Over that same period the total market has increased in size by over 34%, with the vast majority of the growth being the result of increased spending by the hyperscale cloud operators.

Data center hardware and software spending by enterprises and service providers has risen by just 6%. Increased spending by hyperscale operators has been driven by burgeoning demand for public cloud services and continued strong growth in social networking.

Meanwhile enterprise spending has remained under pressure primarily due to the ongoing shift in workloads from private networks to the public cloud. Hyperscale operators include the world’s largest providers in the field of IaaS, PaaS, SaaS, search, social networking and e-commerce.

Dell EMC is the leader in both server and storage revenues, while Cisco is dominant in the networking segment. Microsoft and VMware feature heavily in the vendor rankings due to their leadership positions in server OS and virtualization applications respectively. Outside of these four, the other leading vendors in the market are HPE, Huawei, Inspur, and Lenovo. ODMs in aggregate also feature heavily in the vendor rankings, thanks to their activities supplying hardware to hyperscale operators. Inspur and Huawei are the major vendors that achieved the strongest growth in 2019.

“We are seeing very different scenarios play out in terms of data center spending by hyperscale operators and enterprises,” said John Dinsdale, a Chief Analyst at Synergy Research Group. “On the one hand revenues at the hyperscale operators continue to grow strongly, driving increased demand for data centers and data center hardware. There is an ever-increasing number of hyperscale data centers, many of which continue to be expanded. Those huge data centers are crammed full of servers and other hardware which are on a frequent refresh cycle. On the other hand, we see a continued decline in the volume of servers being bought by enterprises. The impact of those declines is balanced by steady increases in server average selling prices, as IT operations demand ever-more sophisticated server configurations, but overall spending by enterprises remains almost flat. These trends will continue into the future.”

How to change the root MySQL password in WHM