UKCloud, a cloud provider dedicated to the UK Public Sector, has announced the launch of its Cloud GPU computing service based on NVIDIA virtual GPU solutions with NVIDIA Tesla P100 and M60 GPUs (graphics processing units).

Many of today’s modern applications, especially in fields such as medical imaging or graphical analytics, might need a solution like NVIDIA GPU to power them – whether they are running on a laptop or desktop, on a departmental server or on the cloud. 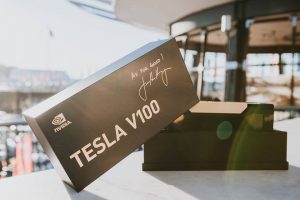 “Building on the foundation of UKCloud’s secure, assured, UK-Sovereign platform, we are now able to offer a range of cloud-based compute, storage and GPU services to meet our customers’ complex workload requirements,” said Simon Hansford, CEO of UKCloud. “The public sector is driving more complex computational and visualization intensive workloads than ever before, not only for CAD development packages, but also for tasks like the simulation of infrastructure changes in transport, for genetic sequencing in health or for battlefield simulation in defence. In response to this demand, we have a greater focus on emerging technologies such as deep learning, machine learning and artificial intelligence.”

Adding cloud GPU computing services utilizing NVIDIA technology to support more complex computational and visualization intensive workloads was a customer requirement captured via UKCloud Ideas – a service that was introduced as part of UKCloud’s focus on “customer service excellence.” UKCloud Ideas proactively polls its clients for ideas and wishes for service improvements, enabling customers to vote on ideas and drive product improvements across the service.

One comment came from a UKCloud partner with many clients needing GPU capability: “One of our applications includes 3D functionality which requires a graphics card. We have several customers who might be interested in a hosted solution but would require access to this functionality. To this end it would be helpful if UKCloud were able to offer us a solution which included a GPU.”

“The availability of NVIDIA GPUs in the cloud means businesses can capitalise on virtualisation without compromising the functionality and responsiveness of their critical applications,” said Bart Schneider, Senior Director of CSP EMEA, NVIDIA. “Even customers running graphically complex or compute-intensive applications can benefit from rapid turn-up, service elasticity and cloud-economics.”

UKCloud’s GPU-accelerated cloud service, branded as Cloud GPU, is available in two versions: Compute and Visualization. The two versions are as follows: