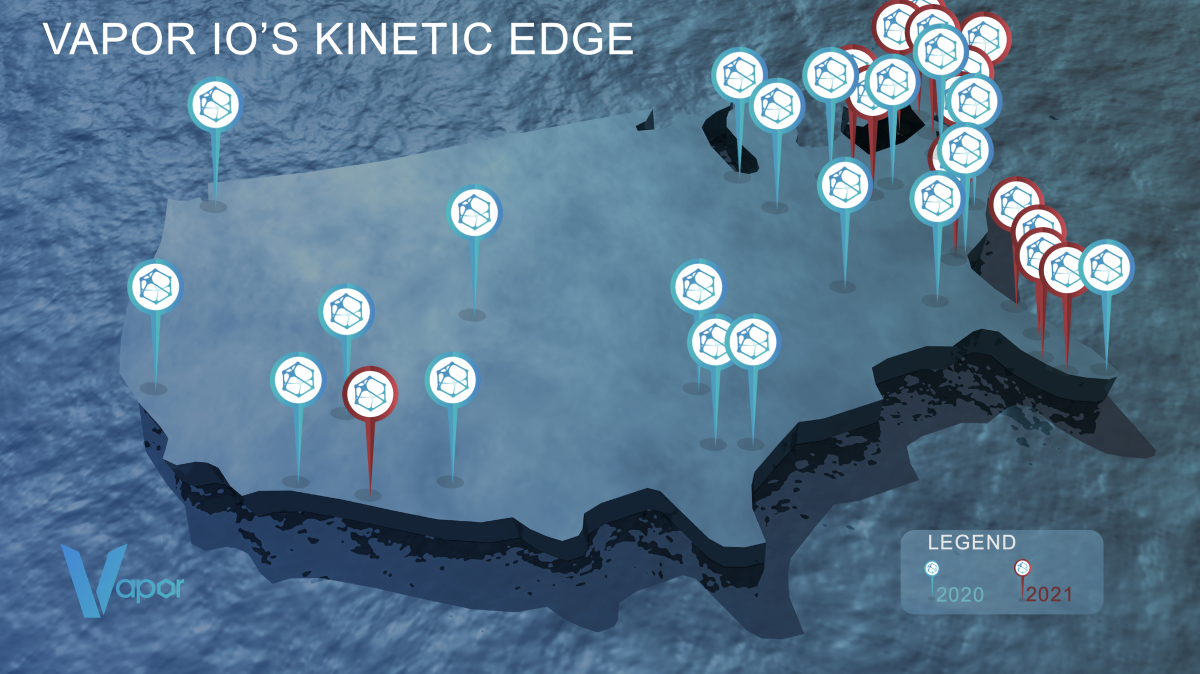 Already deployed in Chicago, Atlanta, Pittsburgh, and Dallas, the company has another 16 markets in pre-construction, most of which it expects to build out in 2020. The company plans to deliver its software-defined Kinetic Edge colocation platform to the top 36 U.S. metropolitan markets by the end of 2021.

“The Third Act of the Internet requires that we build out edge computing infrastructure as quickly as possible,” said Cole Crawford, founder and CEO of Vapor IO. “By deploying Vapor IO’s Kinetic Edge exchange, colocation, and networking services in the top U.S. markets, we provide a platform to deliver low-latency edge capabilities at the intersection

of the wireline and wireless networks. With a total of 36 multi-site markets coming online over the next 24 months, we expect to be the largest provider of edge colocation, edge networking, and edge exchange services in close proximity to the last mile networks.”

This allows its customers to operate servers in locations that are closest to the access networks, near the end users and devices to enable “the next generation” of applications and services.

“Vapor IO has the key ingredients to deliver critical edge computing infrastructure to the top U.S. metropolitan markets,” said Josh Johnson, principal at Berkshire Partners. “We believe they have the technology, expertise, and access to the required land and fiber to build a nationwide footprint. We’re excited to partner with Vapor IO as they deploy fully-integrated edge solutions that improve performance, reduce costs and enable new applications for their customers.”

Vapor IO also has announced a U.S. partnership with Cloudflare. As part of this partnership, Cloudflare will roll out its cloud services via the Kinetic Edge platform across 36 U.S. cities. This partnership would unleash a new class of applications, giving developers the power to run serverless functions through the Kinetic Edge platform, in close proximity to end users and devices, using Cloudflare Workers as well as extending Cloudflare’s “security, performance, and reliability” services even farther out at the edge.

Kinetic Edge Colocation offers customers the ability to place compute, storage and networking equipment in close proximity to the last mile networks, making it possible to deliver “low-latency” edge services. The Kinetic Edge services utilize Vapor IO’s patent-protected enclosure systems, which feature the proprietary Vapor Chamber and Vapor Edge Modules, which are carrier neutral facilities designed with multiple layers of physical and logical security appropriate for a multi-tenant facility. Multiple colocation sites in any one Kinetic Edge city can be treated as availability zones for resilience delivered via high availability software techniques, such as those available with Kubernetes.

Networking on the Kinetic Edge platform is provided by the Kinetic Edge Fabric, a combination of physical fiber networks across each Kinetic Edge city. The fabric would offer granular software-defined controls to create the network infrastructure needed for each customer or application on top of a flexible foundation. The Kinetic Edge Portal lets customers create real-time, virtual private networks that span multiple data centers across the city.

Rackspace Announces Managed IT Services and Support for Google Apps for...