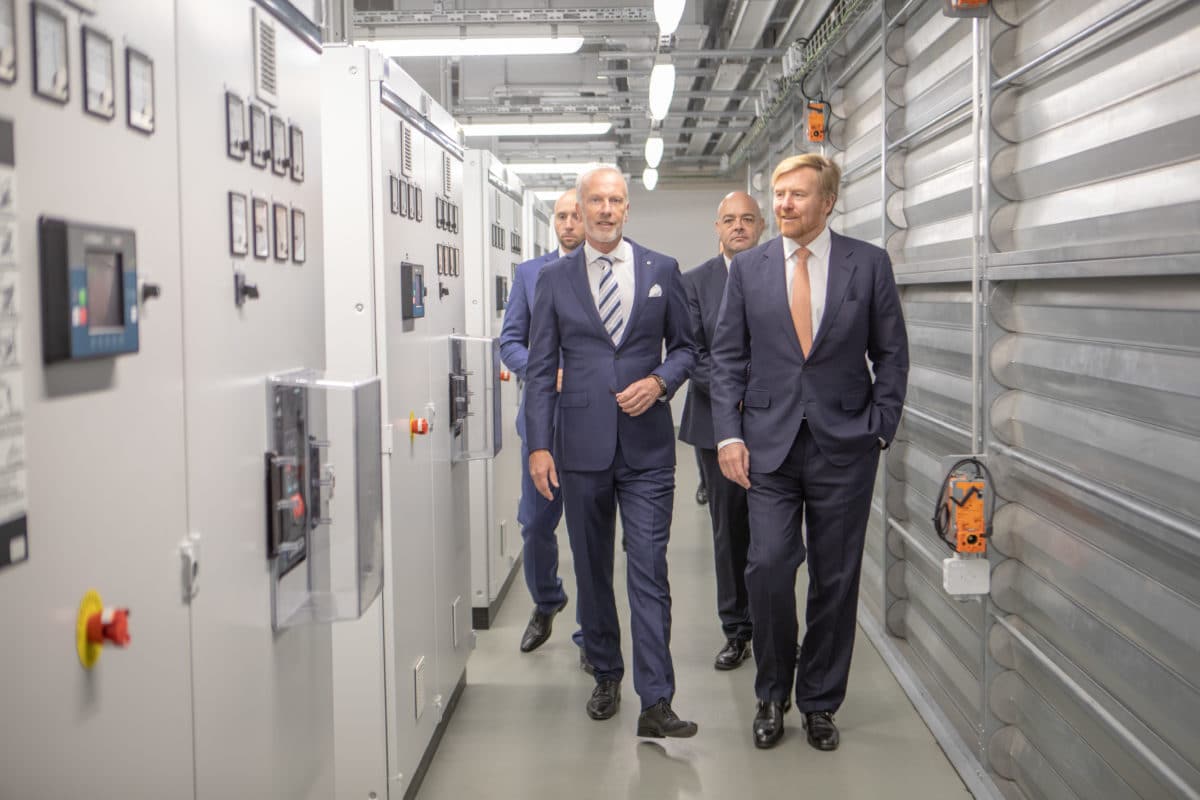 Today, Dutch King Willem-Alexander paid a working visit to NTT’s e-shelter Amsterdam 1 Data Center campus, located at this global Internet hub in the Netherlands. After a tour of this NTT data center that was opened in April 2019, Dutch King Willem-Alexander took part in a number of round table discussions with prominent figures from Dutch ministries and government, the hosting and data center industry as well as energy companies.

NTT’s e-shelter Amsterdam 1 Data Center campus in Amsterdam Schiphol-Rijk contains four data center buildings and offers a total of 16,000m2 of colocation floor space when completed, supported by 40 MW of IT power. NTT invested more than EURO 100 million in only the first phase of this data center campus. The total amount of investment would add up to EURO 400 million. The first two buildings have already been completed and offer energy-efficient colocation data center space for various types of customers such as hyperscalers, governments and large international companies. During a tour of the data center, the Dutch King was given an explanation of the latest techniques in the field of data storage and on the conditions of data center power supply, cooling and security to ensure IT infrastructure continuity.

King Willem-Alexander also participated in various round table sessions on the position of the Netherlands as a ‘Digital Mainport to Europe’ and the required digital infrastructures to maintain this position. At the NTT facilities in Amsterdam, in presence of the Dutch King, top executives from government and the industry were discussing the opportunities and challenges currently facing the data center industry in the Netherlands. 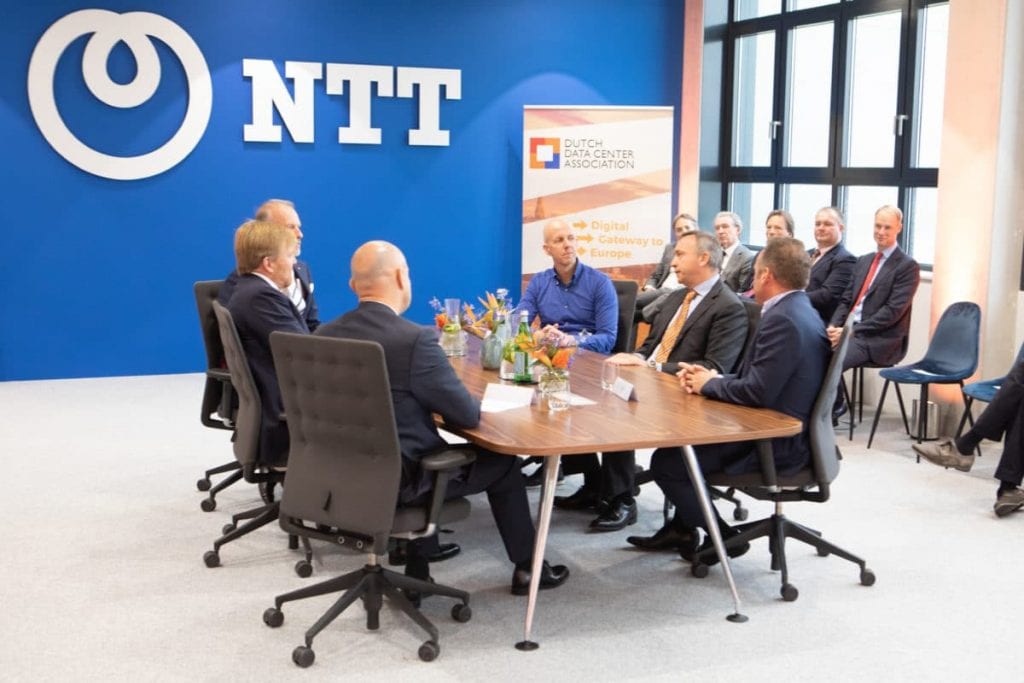 “The aim of the working visit was to investigate how we can further strengthen the digital position of the Netherlands and the digital industry, so that our country can further digitize,” said Stijn Grove, Managing Director of the DDA. “We are honored that His Majesty recognizes the importance of the Dutch digital industry by actively participating in this important meeting.”

The Netherlands is home to one of Europe’s largest data center hubs, with approximately 200 data centers located across the country. The center of gravity is Amsterdam, also named ‘the Digital Gateway to Europe’ by the Dutch Data Center Association. With double-digit growth rates in 2018, the data center and cloud industry in the Netherlands would now represent one of the largest investment sectors accounting for 20% of all foreign direct investments in the Netherlands. Data centers alone would contribute EURO 1.5 billion to the Dutch GNP every year, creating more than 12,500 jobs. Indirectly, more than 69,000 jobs in tech start-ups and scale-ups and another 39,000 jobs in the hospitality industry in the Amsterdam region would be leaning on this.

During the roundtable sessions, a wide variety of companies and organizations joined the Dutch King in the round table discussions. These included the Ministries of Economic Affairs and Climate Policy (EZK) and of the Interior and Kingdom Relations (BZK) as well as the Municipality of Haarlemmermeer in the Netherlands, and the management of international market players such as Booking.com, ING, Tennet, Leaseweb, Equinix, Interxion, EdgeConnex, Iron Mountain Data Centers and AMS-IX.

As a global ICT player, NTT counts more than 40,000 employees and provides services in more than 200 countries and regions. Its ‘Global Data Centers’ division incorporates DPA, e-shelter, Gyron, NetMagic, NTT Indonesia Nexcenter, RagingWire and other NTT Communications group data center divisions. Their combined global platform is one of the largest in the world, with over 140 data centers spanning more than 20 countries and regions including North America, Europe, Africa and APAC. 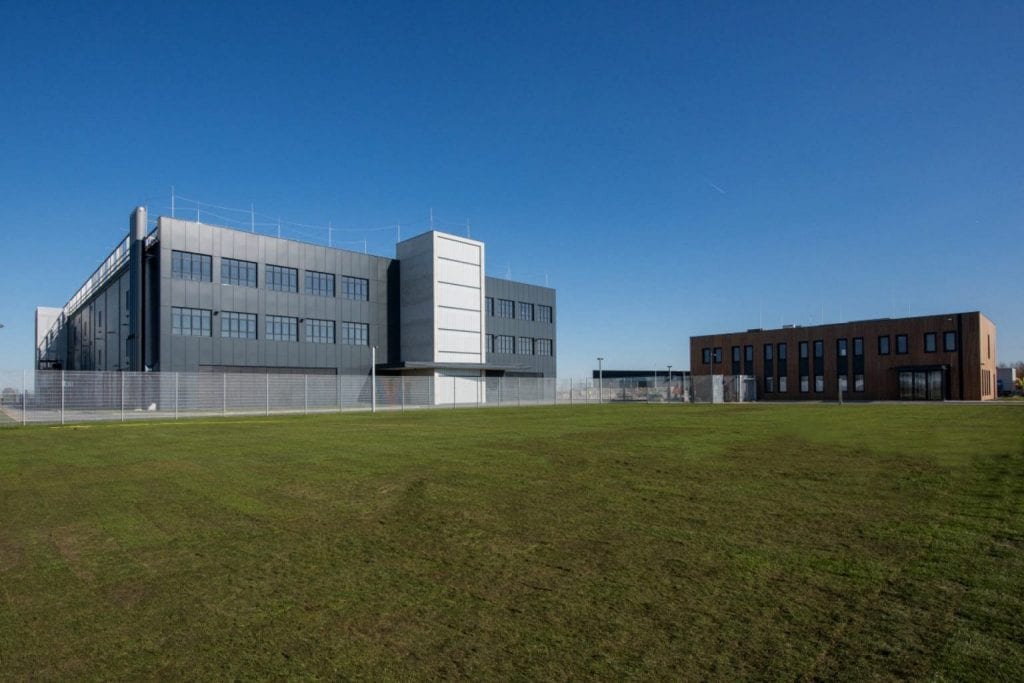 King Willem-Alexander’s working visit to the NTT data center campus in Amsterdam was followed by several high-tech demonstrations by IBM in the city of Rotterdam – where the Mainport Rotterdam is located, one of the world’s largest harbors.

At IBM, the Dutch King attended a demonstration about the port of Rotterdam, where real time weather and water data are used to plan shipping traffic and loading and unloading. The King also attended a demonstration in which – through blockchain technology – electric cars and household batteries can be used to keep the high-voltage grid in balance. Next to that, there was a meeting with the IBM Innovation Team and a number of scale-up companies who held an innovation brainstorm in presence of King Willem-Alexander.

Information technology company IBM has a long history of innovation. Through the years the emphasis has shifted from developing hardware to developing IT solutions for customers including cloud services and artificial intelligence (AI) services.

Can Magento Keep Pace with Technology – UKFast Round Table