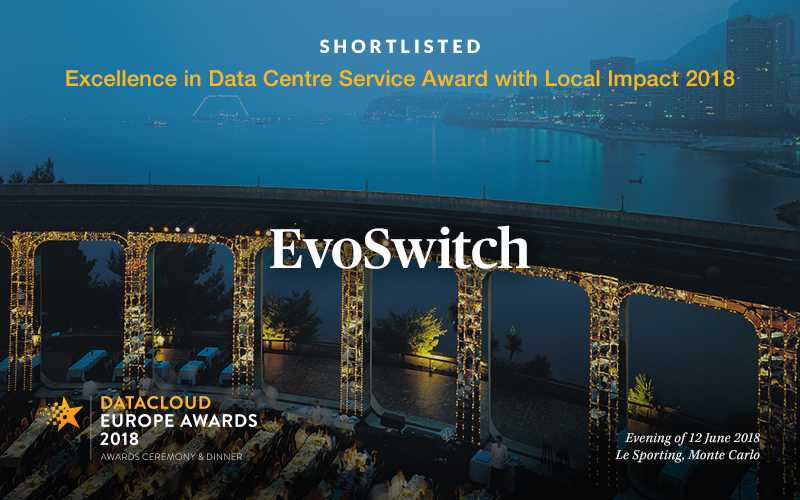 After winning the ‘Best Energy Solution’ award at the Datacloud Europe Awards last year (organized by BroadGroup), EvoSwitch has been shortlisted again this year. Now, the Datacloud Europe Award jury has shortlisted EvoSwitch into three Datacloud Award categories. The award categories honor EvoSwitch for its innovation efforts when it comes to implementing a continual sustainability and operational excellence optimization model for its data centers. The Datacloud Award expert jurors also praised EvoSwitch for maintaining high customer satisfaction levels year-over-year, and for the value-added data center services being deployed.

When launching its Amsterdam colocation data center in 2007, its first facility at the time, EvoSwitch was one of the early carrier-neutral data center operators in Europe with ‘green’ operations. The colocation company – now offering large-scale colocation facilities located in Europe and the U.S. – managed to do so by deploying innovative cooling systems amongst other energy-efficiency enhancing technologies and the use of renewables.

During the last decade, EvoSwitch’s engineering teams have continually made optimizations to their Power Usage Effectiveness (PUE) figures, resulting in an ultra-low day-to-day PUE value for its large-scale colocation data centers ranging from 1.1 to 1.15 currently. The Datacloud Europe Award jury has shortlisted EvoSwitch, again, now for its unwavering commitment to the highest standards of sustainable data center operations and for its culture of continuous operational optimization.

“We sincerely appreciate the triple Datacloud Award nomination, but the real proof of our successes and market leadership can be found in our customer satisfaction rates,” said Eric Boonstra, CEO of EvoSwitch. “A Net Promoter Score metric above 50 is regarded as excellent while we manage to achieve significantly higher figures year after year. Sustainability is a small though valuable component of a wide range of qualities we’re offering, which also includes a 99,999% uptime; compliance with a full range of third-party standards including ISO 27001:2013, PCI-DSS, SOC1 Type II, and ISO 14001:2004; the value-add services we create such as EvoSwitch OpenCloud, to open up customer ecosystems; and much more. We’re happy to see that these outstanding achievements have gained public recognition now that EvoSwitch has been shortlisted Datacloud for their ‘Excellence in Data Centre Service Award with Local Impact’ award category.”

To learn more about EvoSwitch, visit their website here.

EvoSwitch’s continual sustainability and operational excellence optimization model covers a range of topics including: the in-house development of modular, sustainable rack and aisle containment architecture; real-time PUE monitoring, reporting and optimization; ongoing renewables selection, resulting in the adoption of a windmill; providing IT energy audits; sharing EvoSwitch’s commitment to the circular economy by launching whitepapers and hosting events – for example on Reuse & Recycling of Servers; and more.

Selected by an independent international panel of expert Judges, EvoSwitch was nominated in three (!!) categories of this year’s Datacloud Europe Awards. These award categories include: ‘Circular Economy Leadership Award’, ‘Excellence in Corporate Social Responsibility’, and ‘Excellence in Data Centre Service Award with Local Impact.’ In each category, four contestants were being selected. The winners of these categories will be announced at the Datacloud Europe 2018 event in Monaco, to be held 12-14 June (www.datacloudcongress.com).

“To be shortlisted again by Datacloud Europe for our data center sustainability efforts is a great honor I have to admit,” said Eric Boonstra. “True sustainability, operational excellence, and the achievement of high customer satisfaction rates require continuous optimization of data center operations though. That’s why EvoSwitch has implemented a continual sustainability and operational excellence optimization model. It starts with continuously enhancing energy-efficiency levels, in our case by deploying a real-time PUE monitoring & reporting system, and the use of over 8,000 power monitors to drive the energy-efficiency optimization cycle – despite the fact that there is still currently no standard-related obligation to report this data. Our patented, in-house developed 88-rack stand-alone data center modules, engineered for the highest energy-efficiency rates, are another example of our continual optimization efforts.”

“Our continual sustainability optimization model even provides for enhancing colocation customers’ sustainability footprint,” added Mr. Boonstra. “In our Amsterdam facility for example, we are providing IT energy audits to our clients. Our engineers recently managed to reduce a customer’s physical footprint and power consumption by over 20% each. The customer had a mix of virtual and legacy servers, with full racks requiring 4-5 kW power density. They are now using only a quarter of a rack with 2kW of density for the same workload.”

EvoSwitch provides secure and sustainable data center services, with cloud- and carrier-neutral data centers in Europe and the United States. EvoSwitch is home to growing ecosystems of customers around interconnection and hybrid cloud, operating at the edge of the Internet and providing access to public clouds. EvoSwitch enables global and local customers to build their IT infrastructure for growth, creating value for customers and partners alike offering currently 139.900 sq. ft. (14.000 m2) and ample room for further growth on both sides of the Atlantic.