ReliableSite, a provider of dedicated server hosting with network PoPs in three data center locations that connect across the United States, Europe, South America and the Asia-Pacific area, has added Telia Carrier as a new carrier to its global network. 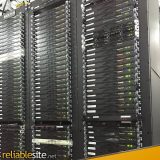 The addition of Telia Carrier would improve ReliableSite’s network performance and reduce latency across its data centers. The dedicated hosting company also now offers a standard 20 Gbps of DDoS protection to all of its dedicated server customers. The DDoS protection offered can be upgraded to protect against larger attacks as needed. Malicious traffic would be mitigated instantly without any packet loss, according to ReliableSite’s official statement.

“We strive to provide the best service in the industry,” said Radic Davydov, founder and CEO of ReliableSite. “Constantly improving our network is a priority, and as all of our data centers are carrier neutral, we can do that with the best providers for our customers.”

ReliableSite’s upgraded network hardware would ensure greater stability as well. With thousands of customers in data centers across the continental United States, ReliableSite says it is committed to having redundant service at every location. This brings its New York City metro, Miami, and Los Angeles locations up to a half dozen premium upstream providers.