Digital Realty, a global provider of data center, colocation and interconnection solutions, has announced the appointment of Daniel Papes as Senior Vice President, Global Sales and Marketing. Mr. Papes will be responsible for overseeing Digital Realty’s sales, leasing and marketing efforts across the organization, reporting directly to Chief Executive Officer A. William Stein.

“We’re delighted to welcome Dan to the Digital Realty team,” said Mr. Stein.  “Dan is a technology industry veteran with an exceptional track record of establishing, overseeing and improving sales and marketing operations at leading tech companies, including Unify, Westcon and IBM.  His global sales leadership experience and broad industry expertise make him an ideal addition to our team as we work to expand our offerings and establish even greater scale across the globe.” Daniel Papes will be based in New York, and his start date will be November 1, 2016. 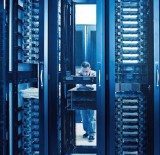 Prior to joining Digital Realty, Daniel Papes served as Executive Vice President for North America at Unify, formerly Siemens Networking Systems, managing all aspects of the business until its acquisition by Atos earlier this year. At Unify, Mr. Papes led significant growth in revenues, deal volume and profitability in addition to helping establish a new senior leadership team.