The concept of dedicated servers has not changed since the birth of the Internet.

Although modern technologies have given rise to new server types, at the core of our digital world still sits the good old dedicated server. The only thing that has changed over the decades is how we deliver and consume dedicated server resources.

A perfect example of that change is the bare metal cloud server.

Dedicated servers are physical machines (i.e., computers) that are made up of physical processors, RAM chips, and storage disks. Dedicated servers are usually housed in data centers or on-premises and are highly customizable hardware-wise. Provisioning a dedicated server takes time and requires human intervention. That’s because technicians have to build the server manually by putting together physical hardware components.

Bare metal cloud is a blend of dedicated and Public Cloud servers. The phrase ‘bare metal’ refers to the fact that users have full control over the server’s physical metal hardware. This means that there is no pre-installed virtualization on the server that might limit hardware access, hence the name ‘bare metal.’

How do bare metal cloud and dedicated servers compare?

While dedicated and bare metal cloud servers share many of the same physical features, they differ in terms of delivery and consumption.

– Blog continues below the image – 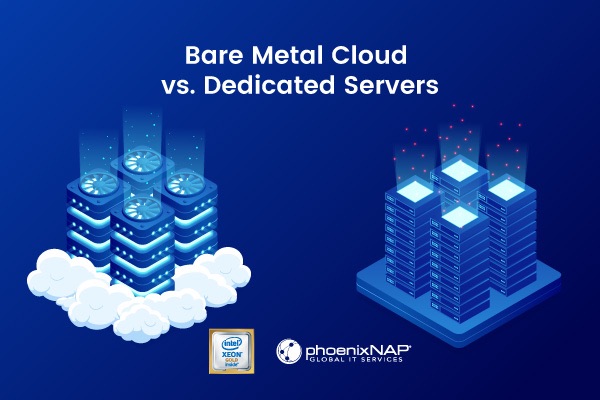 Provisioning and deploying a dedicated server is a manual job. Somebody has to set up the server by hand and connect it to the network. This usually involves installing CPU, RAM, and disk components into a server chassis. Installing dedicated servers with a data center provider usually takes hours, while setting up multiple on-prem servers can last for weeks or even months.

What dedicated servers lack in terms of provisioning speed they make up in the customization department. For example, dedicated servers can be customized down to the smallest detail such as choosing a particular CPU make and model.

Bare metal cloud servers heavily rely on automation to enable dynamic provisioning. Deploying a bare metal cloud server is measured in minutes rather than days or months as is the case with dedicated servers. Users simply choose which pre-configured server instance they want to deploy and let automation take care of the setup process. If there is a need for more compute, memory, or storage resources, users can simply upgrade to a more powerful instance type.

Both dedicated and bare metal cloud servers can be scaled vertically and horizontally, but the scaling procedures are different. When scaling a dedicated server vertically, human intervention is inevitable. Since vertical scaling involves upgrading the server’s components, the machine has to be taken off the network which may result in downtime.

Scaling a bare metal cloud is as easy as scaling a virtual cloud server. When users need more CPU, RAM, or storage space, they simply switch to a server instance type that has the resources they need. The scaling process is also fully automated and does not require human intervention. However, some downtime should be expected since the new machine needs to be provisioned and data moved to the new environment.

Dedicated servers are usually billed on a monthly or yearly basis. It’s not unusual for service providers to require users to sign long term leasing contracts. This is mostly due to the fact that dedicated servers have to be provisioned manually based on specific requests from the customer.

On the other hand, bare metal cloud solutions are billed on a pay-per-use basis. Users deploy servers on-demand and only pay for the resources they consume. When those resources are not needed anymore, the server is destroyed and all billing stops.

Compared to virtualized cloud servers, both dedicated and bare metal cloud servers deliver exceedingly better performance. This is because there are no pre-installed virtualization layers. Since virtualization technologies such as hypervisors or container engines also consume server resources, apps are deprived of utilizing 100% of the server’s processing potential. In the absence of virtualization, workloads can take advantage of the raw processing power of physical CPU and RAM resources.

In non-virtualized dedicated environments, there is also no resource sharing among multiple tenants on the same machine. When different users have to share resources, which is the case in virtual cloud environments, performance takes a hit and the so-called “noisy neighbor” effect becomes an issue. If one user begins hogging resources or suffers a cyberattack, other users on the same machine will experience performance degradation. This is a non-issue in dedicated environments.

The core concept behind bare metal cloud solutions is agility. Having the ability to automate server management and treat physical infrastructure like software is what sets bare metal cloud servers apart from dedicated servers. This automation-first approach is made possible through the use of APIs.

Most bare metal cloud solutions of today come with custom-built APIs which allow users to interact with servers programmatically. In other words, users can deploy and destroy servers with code rather than by clicking buttons in a web-based interface. APIs also make it possible to integrate bare metal cloud servers with various Infrastructure as Code (IaC) engines such as Terraform, Ansible, or Puppet.

In most cases, providers will have custom IaC modules that users can leverage to speed up the server management process and maintain consistency across different environments. When teams need to spin up identical environments across multiple machines or providers, IaC allows them to execute scripts that interact with the provider’s API. Once a call is made to the API, automation kicks in and takes care of the entire deployment process.

Whether your workloads require maximum compute power, or you need unlimited control over your environments, both dedicated and bare metal cloud servers will live up to your expectations.

Bare Metal Cloud is an automation-driven dedicated server solution delivered on the cloud model. With 20 different server instance types, the platform is tailor-fit to meet performance, agility, and scalability needs of DevOps-centric organizations.

Deploying a Bare Metal Cloud server takes less than two minutes, and resource usage is billed by the hour. Users can spin up servers via a web-based interface, or by utilizing custom-built API and CLI utilities. On top of that, Bare Metal Cloud comes with certified Terraform, Ansible, and Pulumi modules, allowing users to manage servers programmatically.

To learn how easy it is to deploy and manage Bare Metal Cloud resources, take a look at this helpful tutorial: