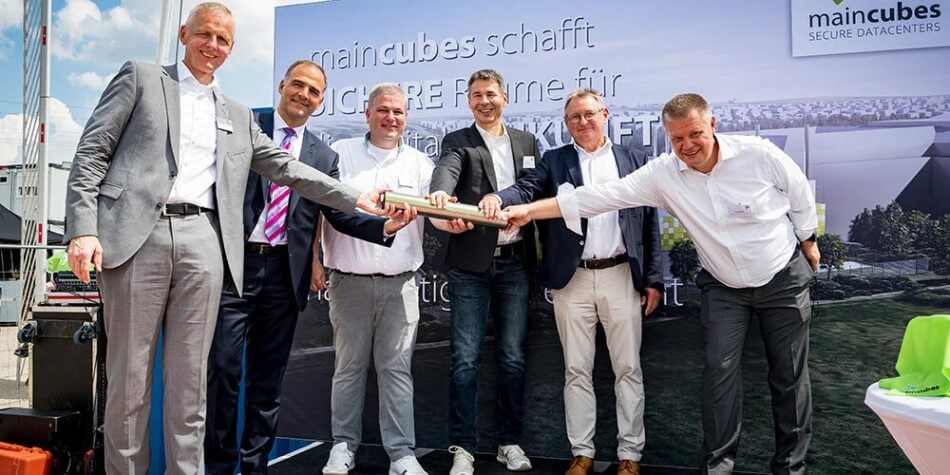 On June 30, the ceremonial laying of the foundation stone for maincubes’ new data center FRA02 took place in Schwalbach near Frankfurt. Alexander Immisch, mayor of Schwalbach, acknowledged the importance of the new data center and its focus on ecology. He also welcomed the anchor colocation client of the building: the Federal Information Technology Center (ITZBund), the central IT service provider of the federal administration.

After the first excavators rolled on the construction site about a year ago, the laying of the foundation stone of the maincubes FRA02 colocation data center could only take place now due to COVID-19. All the more impressive were the glimpses of the construction progress that awaited the guests at the ‘Laying of the Foundation Stone Reloaded’ at the Kronberger Hang industrial park in bright sunshine, according to maincubes.

“Planning a data center architecturally and, above all, technically, obtaining the permits, building it and aligning it to the specific requirements of the user – that’s a complex matter, but it really runs smoothly and constructively here,” said Oliver Menzel, CEO at maincubes. “We have found a very good location for our FRA02 facility, many thanks for the constructive cooperation to the magistrate of the city of Schwalbach and mayor Mr. Immisch. maincubes is majority owned by the Zech Group in Bremen, through which we were able to source our partners and thus use all resources from one source, which has many advantages. Many thanks to ICT Facilities for the planning, Zech Bau for the implementation and ROM for the building services.”

The fact that the maincubes colocation data center is being built according to comprehensive sustainability and climate protection standards was an important decision criterion for the anchor client, ITZBund. Architecture and technology are state-of-the-art, the power supply runs entirely on green electricity, and various waste heat concepts are planned.

“Our aim is to realize the best possible in terms of sustainability and, at the same time, maximum security for our data producers,” said Albrecht Kraas, CTO at maincubes. “This means planning as efficiently as possible, not wasting space, and only building what is needed. With its green and white façade facing south, FRA02 will blend in well with the landscape and add value – for digitization and the people, companies and authorities who use it.”

maincubes is part of German construction conglomerate Zech Group. Burkhard Schmidt, CEO of Zech Group, described the new FRA02 data center as a ‘lighthouse project’ – and as an important symbol for Zech Group, which provided all the trades: “Realizing the data center with all the goals and within the planned time is a challenge that we are mastering very well together. We are already looking forward to being part of it again at the opening.”

NTT Opens Its First Data Center in Spain, in Madrid