PacketFabric, a company leveraging an entirely automated SDN-based network architecture and the latest in optical and packet switching technology, has announced the launch of its “next-generation” Ethernet-based cloud networking platform in 11 metropolitan markets across North America.

PacketFabric’s Cloud Networking Platform is powered by Juniper Networks’ QFX10000 line of switches. These switches would provide future-proof flexibility and scalability to meet current and evolving network connectivity needs. The QFX10000 line would offer the capacity and scalability needed to meets the highest demands from data centers as well as private and public cloud environments.

The PacketFabric platform would enable customers to instantaneously provision massively scalable network connectivity between any two or more points across its private backbone network. Rather than relying on traditional telecommunications solutions, which can take weeks or months to provision for every new circuit and typically come with long-term and inflexible contracts, companies can now dynamically provision capacity as needed to hundreds of different networks and major data center locations. 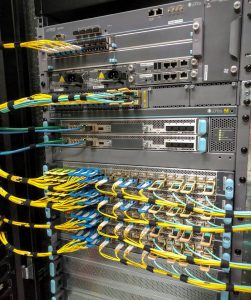 “When we set out to create PacketFabric, our goal was to completely change the networking ecosystem, radically overhauling the way companies think about procuring and maintaining their networking services,” said Richard Steenbergen, Chief Technology Officer (CTO) of PacketFabric. “To do that, we knew we needed to combine technologies from different disciplines in a way that had never before been achieved, and deliver truly disruptive scale and performance, consistent with the vision at NantWorks. Our platform is uniquely designed to deliver on the requirements of next-generation networks, with a robust, custom-designed orchestration layer capable of provisioning tens of millions of virtual circuits.”

PacketFabric is a member of the NantWorks ecosystem of companies, founded by renowned physician scientist and inventor of the first human nanoparticle chemotherapeutic agent Abraxane, Dr. Patrick Soon-Shiong. NantWorks is the umbrella organization for the following entities: NantHealth, NantMobileHealth, NantOmics, NantBio, NantCell, NantPharma, NantCapital and NantCloud.

“This next-generation, scalable cloud networking fabric will enable disparate marketplaces such as our healthcare delivery system to communicate seamlessly and to enable secure transfer of data at gigabit to terabits per second speeds if so needed,” said Dr. Patrick Soon-Shiong, Chairman and CEO of NantWorks. “In this era of big data and augmented intelligence in medicine, PacketFabric’s next-generation cloud infrastructure fulfills an infrastructure unmet need in the delivery of 21st century molecular medicine.”

How to Secure Your WordPress Site