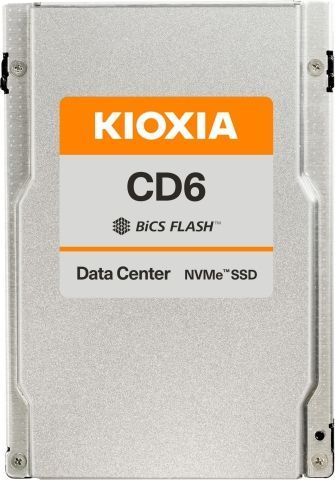 KIOXIA’s lineup of PCIe Gen4 NVMe SSDs would bring performance improvements of “up to 2x over its PCIe Gen3 predecessors and is 12x faster than SATA SSDs.”

“At KIOXIA, we are committed to working closely with our customers to create value and deliver greater performance, reliability and TCO,” said Jeremy Werner, senior vice president and general manager, SSD Business Unit, KIOXIA America. “Our OEM customers are bringing cutting-edge storage performance to end users thanks to our lineup of PCIe Gen4 and U.3 solutions. With the CD6 Series, HPE can offer the latest technology and improved application and system efficiency.”

KIOXIA has been collaborating with HPE to create best-in-class flash-based storage solutions for years.

CD6 Series SSDs (along with CM6 Series SSDs) are SFF-TA-1001 compliant (also known as U.3), enabling NVMe, SAS or SATA drives to be used in a Universal Backplane Management-enabled (SFF-TA-1005) drive slot within HPE Gen10 Plus platforms, which simplifies future upgradability and lowers cost for customers. KIOXIA’s CD6 and CM6 Series U.3 NVMe SSDs are natively backward compatible with U.2 NVMe SSD drive slots, which are supported on HPE Gen10 platforms.

“Customers increasingly turn to HPE for IT solutions that continue to offer the most advanced, innovative capabilities, to accelerate application performance across new and demanding workloads and fast-track delivery for new ideas, products and services,” said Krista Satterthwaite, vice president, HPE Compute Product Management. “Through our latest collaboration with KIOXIA, we are offering customers high-performance storage at an affordable price by combining HPE servers with new cutting-edge PCIe Gen4 NVMe mainstream performance U.3 SSDs.”

CloudLinux Collaborates with Microsoft to Create Integration for KernelCare IoT