FullHost, a Canadian web hosting provider, has announced that all domains on their hosting platform will now have a SSL certificate installed by default. This offering has been implemented in conjunction with the nonprofit project Let’s Encrypt – an open certificate authority provided by the Internet Security Research Group (ISRG).

There are several advantages to having a SSL certificate implemented on a website. A domain with SSL/TLS enabled has the ability to encrypt traffic coming and going between the server and the visitor’s browser, protecting the privacy of information being transmitted and shared. Additionally, having an SSL certificate provides higher rankings from Google and other search engines potentially increasing sales and exposure. 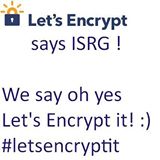 By the time Let’s Encrypt left the Beta stage in April 2016, millions of website domains had activated SSL certificates through the program.

From their headquarters in Victoria BC and their data centers in Vancouver and Toronto, Fullhost provides a wide array of options from shared web hosting and managed WordPress hosting, to managed virtual cloud and bare metal dedicated servers.

Traffic Handling within the ACI Fabric

Google’s Vision for a Safer Web (Next Rewind ’18)