Cartika’s Virtual Desktops combine “the power and flexibility of” the familiar Microsoft Windows environment with “the scalability, security, and reduced complexity” of a managed cloud platform. With Virtual Desktops, businesses don’t have to worry about procuring and maintaining complex desktop hardware deployments, slashing the cost of hardware and software management. 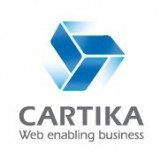 Virtual Desktops give employees the flexibility to access their files and applications from any capable device while giving IT departments the control they need to maintain security and compliance. Virtual Desktops can be deployed in both Cartika‘s Dallas facility in the U.S., or its Toronto facility in Canada.

“Cartika’s Virtual Desktop platform joins our existing cloud infrastructure and managed services portfolio to make Cartika one of the few hosting providers to offer a comprehensive range of cloud-based services to business,” said Andrew Rouchotas, CEO of Cartika. “From infrastructure-as-a-service to backup and enterprise desktop hosting, our cutting-edge modular services allow businesses to build an enterprise IT platform that exactly matches their business needs.”

Cartika’s Virtual Desktops are designed with the same modularity as the company’s other offerings: the core experience includes a two-user enterprise desktop with either Microsoft Windows 8 or Windows Server 2012. The underlying virtual server is a single CPU configuration with 2 GB of RAM, 60 GB of high-performance storage, and unmetered 100 Gbps bandwidth. All plans include Microsoft Forefront AV. Upgrades include extra CPU cores, memory, and storage, as well as Microsoft Office software and terminal services.

451 Research Survey: Nearly 80% of Enterprises Will Increase Spending on...

Lawrence Jones of UKFast on the Right to be Forgotten EU...