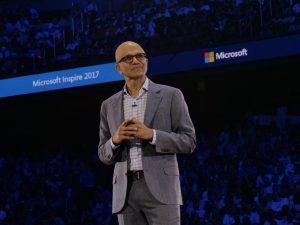 In Q2 2018, Microsoft has posted a whopping 56% year-over-year increase in ‘Commercial Cloud’ revenue now totaling $5.3 billion, while revenue in ‘Intelligent Cloud’ was $7.8 billion and increased 15% year-over-year. Total revenue during the second quarter was $28,9. It seems that Satya Nadella’s turnaround towards establishing a cloud-focused company is paying off after being in charge for four years now as the CEO of Microsoft.

When Mr. Nadella was promoted to CEO in February 2014, Microsoft had a huge problem as their core business of enterprise-owned and Windows-powered PCs and servers were declining at a rapid pace. Now, the company seems to be doing very well again with their focus on cloud innovation and cloud adoption and fast-growing interest for their global Azure platform.

“We delivered another strong quarter with commercial cloud revenue growing 56% year-over-year to $5.3 billion,” said Amy Hood, executive vice president and chief financial officer (CFO) of Microsoft. “Strong execution from our sales teams and partners is driving growth across our businesses.”

Revenue in Productivity and Business Processes – including Office, Dynamics and LinkedIn – was $9.0 billion and increased 25%, with the following business highlights:

Revenue in Intelligent – including Microsoft Azure, Windows Server en SQL Server – was $7.8 billion and increased 15%, with the following business highlights:

Revenue in More Personal Computing was $12.2 billion and increased 2%, with the following business highlights:

Microsoft took a $13.8 billion charge though in this quarter due to a tax bill signed into law in December. With the charge, Microsoft posted a $6.3 billion net loss loss, but without this charge, the company’s profits hit $8.7 billion – up 10% compared to the same period a year ago.