Penton, the New York-based media and event company with a variety of data center and web hosting brands in its portfolio including TheWHIR, Data Center Knowledge, WebHostingTalk, HostingCon, and more, has announced Andrew Blum as keynote speaker at the annual HostingCon Global event, to be held July 24-27, 2016. This year’s HostingCon event will be hosted at the New Orleans Convention Center in New Orleans, Louisiana.

Andrew Blum is an experienced writer and contributing editor for an impressive list of publications and online magazines including Wired Magazine, BusinessWeek, Metropolis Magazine, and Urban Omnibus.

Mr. Blum’s keynote would offer the HostingCon Global 2016 audience a fascinating discussion on the Internet and the different ways it impacts the lives of humans. Mr. Blum’s address will discuss the Internet, its infrastructure and the geography and physical architecture of the cloud.

“Hosting and cloud providers have become the linchpin of the Internet as we use it everyday,” said Andrew Blum. “I’m eager to address this group about the history, context and stakes of the Internet’s ‘tubes,’ which are so crucial to the services the attendees and exhibitors provide.

Andrew Blum’s first book, published in 2012, is called ‘Tubes: A Journey to the Center of the Internet.’ It explores the physical makings of the Internet all over the world, from Nova Scotia to Africa.

The New York Times, The Guardian

“We are very excited to have Andrew speak at our 12th annual event,” said Cheryl Kemp, conference chair for HostingCon. “He came highly recommended by several members of our advisory board and we are lucky to have such an engaging speaker participate in the show.” 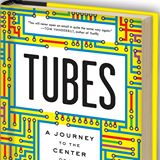 As an engaging and well-respected speaker, Mr. Blum has discussed the book at dozens of prominent venues, and when the Edward Snowden/NSA revelations caused the world to take notice, many journalists relied on Tubes as a reference for the Internet’s infrastructure.

“Andrew helps to untangle the spider web of how the Internet connects,” said Robert DeVita, Chief Sales Officer for fifteenfortyseven Critical Systems Realty and HostingCon Advisory Board member. “His content is a must see for anyone in the hosting, cloud and data center space.”

There will be several new offerings at Penton’s HostingCon Global 2016 including speed roundtables and lightning talks. In addition, the event will host an exhibition floor that include prominent businesses in the cloud and a service provider ecosystem.

Break Digital Silos to Get Ahead