Switch, a Las Vegas-based data center operator delivering colocation services from its SUPERNAP facilities, has announced that as of January 1, 2016 all of its Switch SUPERNAP data centers and its more than 1,000 clients who are colocated at their facilities, will be powered by 100 percent renewable energy.

Switch will be producing the renewable energy it needs to run its SUPERNAP data centers through new solar facilities operating in Nevada. During the construction of its new 180-megawatts of solar generation projects, Switch Station 1 and Switch Station 2, Switch has partnered with local utility NV Energy to utilize renewable energy from existing facilities in the state. 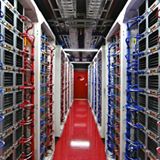 During the 2015 Clean Energy 8.0 Summit held in Las Vegas where President Barack Obama was the featured keynote speaker, Switch became one of the first data center providers to join the American Business Act on Climate Pledge. The White House-led initiative brings private-sector companies together who pledge to combat climate change. Switch pledged its commitment to running its SUPERNAP data centers on 100 percent renewable power.

“When I started Switch 16 years ago it was with a commitment to sustainably running the Internet,” said Rob Roy, founder and CEO of Switch. “From the more than 218 patented technologies that run the SUPERNAP data centers to the third-party audited industry leading Power Usage Effectiveness (P.U.E.) to the purchase of 100 percent renewable power, Switch has cemented itself as the leader of sustainability in the data center industry.”

“Switch has set a new standard for using renewable resources to power their growing business,” said NV Energy President and CEO, Paul Caudill. “We all are proud to partner with Switch to help it become the first southern Nevada customer to be supplied by 100 percent renewable energy. Switch’s leadership has opened the door for other large customers, including the City of Las Vegas, to meet their own renewable energy goals without negatively impacting the rates of other customers.”