Intent on replacing their legacy disk platform with a solution that was simple, high-performance and scalable, the Giants turned to the Pure Storage FlashArray//m20. While baseball operations worked tirelessly this offseason to field the most competitive squad possible, the franchise’s IT team focused on enhancing the performance of its data storage infrastructure.

“Pure Storage will enable us to move away from the complexity associated with traditional storage platforms by reducing dependency on disk-based storage technologies,” said Bill Schlough, CIO, San Francisco Giants. “Pure’s functional simplicity and ease-of-use will allow our IT staff to focus on driving improved business value for the organization, and will eliminate storage from the list of concerns for our extremely busy team.” 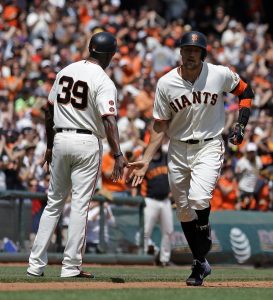 As advanced statistics and analytics become increasingly more important in professional sports, the ability to access and discern tangible value from massive amounts of organizational data has become paramount. This coming season, the Giants will depend on Pure Storage to access critical data more quickly, thereby enabling better personnel decisions on the diamond, and better business decisions behind the scenes.

Increased storage density with Pure Storage will allow the Giants to consolidate a full rack of disk to just three rack units. Additionally, the data efficiency derived from Pure’s unique blend of data reduction technologies will accelerate time-sensitive analyses. The elimination of storage system cost and complexity would enable the organization to be agile when implementing storage-dependent initiatives.

Pure Storage would deliver a multitude of transformative benefits to the Giants organization, including reduced data processing times for key SQL workloads and reduced time to clone SQL workloads for business intelligence use cases. All-flash design would enable consistent, increased performance for database and analytics workloads across the organizations.

“Champions choose products that allow them to maintain an expected baseline of excellence,” said Jonathan Martin, CMO, Pure Storage. “To work alongside a franchise that has been synonymous with the highest levels of achievement since the turn of the decade is a tremendous validation of our technology. IT decision makers and fans alike will appreciate that the Giants have chosen a best-in-class all-flash array to help move the organization into the future – a future we are confident will translate to continued success both on and off the field.”

One of the oldest teams in Major League Baseball, the San Francisco Giants moved to San Francisco from New York in 1958. After playing a total of 42 years in Seals Stadium and Candlestick Park, the 134-year old franchise moved to the privately constructed AT&T Park in 2000. In 2008, the Giants celebrated the team’s 50th year in San Francisco and it was the center of the baseball universe when it hosted the 78th Major League Baseball All-Star Game on July 10, 2007. AT&T Park has also played host to some of music’s biggest acts, including Beyoncé & Jay Z, the Rolling Stones, Bruce Springsteen and the E-Street Band, Green Day and Billy Joel.

EdgeConneX Expands Presence in Benelux with Data Center in Belgium

Oops… A Sit Down with the Man Who Deleted @realDonaldTrump

How to install and manage cPanel Addons in WHM