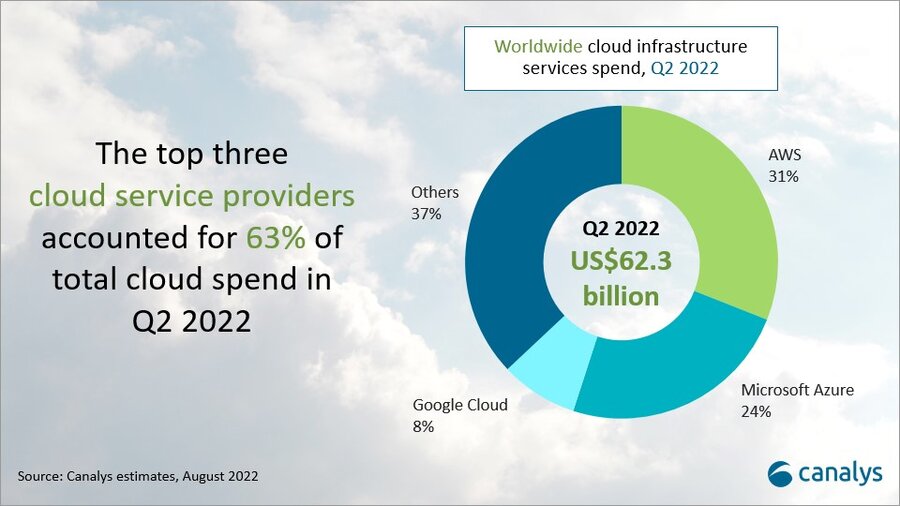 The demand for cloud infrastructure services remained high in Q2 2022, according to a new study conducted by Canalys. A number of variables, such as the need for data analytics and machine learning, data center consolidation, application migration, cloud-native development, and service delivery, contributed to the global spending growth of 33 percent on an annual basis to $62.3 billion.

The expanding use of sector-specific cloud applications also aided in the expansion of horizontal use cases across IT transformation. According to these most recent Canalys statistics, spending was up more than $6 billion from the previous quarter and $15 billion from Q2 2021. Amazon Web Services (AWS), Microsoft Azure, and Google Cloud Platform (GCP), the top three suppliers in Q2 2022, together accounted for 63 percent of worldwide spending and had a combined growth of 42 percent.

The demand for cloud services is still high in a world economy plagued by recession, increasing interest rates, and inflation. AWS was the top cloud service provider in Q2 2022, with a share of the market for cloud infrastructure services of 31%. It experienced an annual growth rate of 33%. With a 24 percent market share in Q2 and yearly growth of 40 percent, Azure was the second-largest cloud service provider. In the most recent quarter, Google Cloud Platform climbed by 45 percent and held an 8 percent market share.

Microsoft Azure is catching up to leader Amazon Web Services in the ongoing hyperscale competition, which is becoming more intense. Microsoft cited a record number of bigger multi-year partnerships, both in the $100 million and $1 billion divisions, as the driver of this rise. Microsoft is able to keep up with AWS because to a comprehensive go-to-market environment, a large portfolio, and a variety of software collaborations.

“Cloud remains the strong growth segment in tech,” said Alex Smith, Vice President at Canalys. “While opportunities abound for providers large and small, the interesting battle remains right at the top between AWS and Microsoft. The race to invest in infrastructure to keep pace with demand will be intense and test the nerves of the companies’ CFOs as both inflation and rising interest rates create cost headwinds.”

Microsoft and AWS are both still deploying infrastructure. Microsoft Azure aims to introduce 10 additional regions over the coming year while AWS wants to introduce 24 availability zones across eight regions. In both situations, the providers are increasing their investment outside of the US in an effort to meet global demand and make sure they can deliver solutions with a high degree of data sovereignty and low latency.

“Microsoft announced it would extend the depreciable useful life of its server and network equipment from four to six years, citing efficiency improvements in how it is using technology,” added Mr. Smith. “This will improve operating income and suggests that Microsoft will sweat its assets more, which helps investment cycles as the scale of its infrastructure continues to soar. The question will be whether customers feel any negative impact in terms of user experience in the future, as some services will inevitably run on legacy equipment.”

Beyond capacity expenditures, software capabilities and alliances are essential to satisfy client cloud demands, particularly when taking into account the computing requirements of highly specialized services across several industries.

“Most companies have gone beyond the initial step of moving a portion of their workloads to the cloud and are looking at migrating key services,” said Yi Zhang, Research Analyst at Canalys. “The top cloud vendors are accelerating their partnerships with a variety of software companies to demonstrate a differentiated value proposition. Recently, Microsoft pointed to expanded services to migrate more Oracle workloads to Azure, which in turn are connected to databases running in Oracle Cloud.”