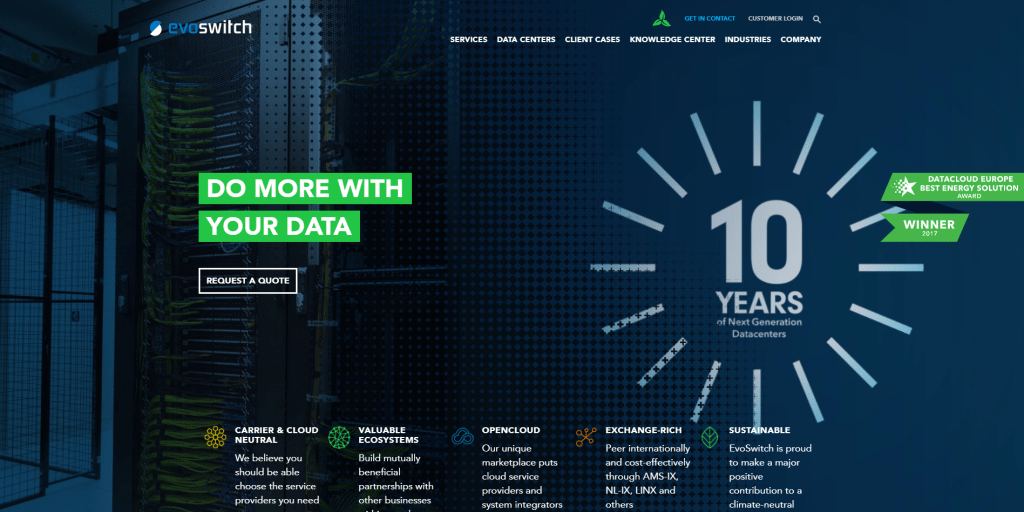 EvoSwitch, a Europe and U.S. based colocation data center company with sustainable characteristics and its partner-rich cloud interconnection platform, celebrates its 10th anniversary with the completion of a corporate rebrand – the first in its history. The brand repositioning includes a redesigned corporate identity and a fully new website which now includes a continuously expanding knowledge platform on topics like (hybrid) cloud and colocation.

When starting its colocation data center business 10 years ago in the Amsterdam area, EvoSwitch was one of the first companies in Europe to launch a carbon-neutral colocation data center facility with highly efficient cooling systems, renewable energy usage, and a low Power Usage Effectiveness (PUE) figure for energy efficiency purposes. EvoSwitch’s significantly expanded managed services and added value delivery would justify their step towards this newly completed corporate brand identity.

“The use of renewable energy and a low PUE figure are nowadays not as uncommon as ten years ago, although today having the best PUE in the colocation market is still highly impressive I must say – especially for the large facilities owned and operated by EvoSwitch,” said Eric Boonstra, CEO at EvoSwitch. “Energy-efficiency still plays a critical role in our day-to-day data center operations, but in recent years we’ve taken our colocation services to the next level by adding all kinds of managed services and enterprise-grade value.”

“The cloud interconnection platform EvoSwitch OpenCloud is a good example of the value being added in the last two years,” said Mr. Boonstra. “Also EvoSwitch’s in-house developed modular data center building concepts with energy-efficient features and short lead times for implementation are an integral part of our corporate brand identity today. Not to forget about EvoSwitch’s international presence, with our U.S. data center in Manassas, Virginia being added in 2012. All these infrastructural achievements make our 10th anniversary a milestone worth celebrating. The newly completed EvoSwitch corporate brand identity with refreshed logo and updated website design better matches the smart and powerful corporate profile we have established since 2007.”

The addition of a Knowledge Center on the new EvoSwitch website, with strategic information resources including white papers on (hybrid) cloud, colocation and sustainability (https://evoswitch.com/knowledge-center/#white-papers), as well as videos and expert blogs, would also reflect the company’s shift in recent years towards a corporate identity which now includes a complete set of value-added managed services.

EvoSwitch’s new corporate brand identity and website are being developed by award-winning Dutch agency Studio Piraat (http://studiopiraat.nl). The agency was requested to design a new website and logo reflecting EvoSwitch’s facilitating role towards its ‘customer cloud ecosystems’ and its ‘open and knowledge sharing’ characteristics. The complex technologies and value-added solutions being delivered needed to be translated towards a clean, simple but strong visual design.

The designers from Studio Piraat used new icons and fonts with a ‘future forward design,’ while developing unique illustrations and graphics for this new corporate brand identity. Part of it is also an animation with a scroll-based infographic (https://evoswitch.com/about/), which at a glance would explain what the EvoSwitch ecosystem and value-add is all about.

“In 2007 we used to call ourselves a ‘next generation’ data center provider,” added Mr. Boonstra. “Although I know it’s a marketing term by now that’s being used too often, it really was communicating what we stood for then. We were spearheading the international colocation business by going green, as one of the first on a European level in the global data center market. By continuously keeping focused on developing and adding new managed services – in line with evolving hybrid cloud customer needs and requirements – we’re convinced that we will be able to stay ahead of the market for the next 10 years to come. The new EvoSwitch corporate brand identity being implemented when celebrating our 10th anniversary is meant to support that goal.”

EvoSwitch provides secure and sustainable data center services, with cloud- and carrier-neutral data centers in Europe and the United States. EvoSwitch is home to growing ecosystems of customers around interconnection and hybrid cloud, operating at the edge of the Internet and providing access to public clouds. EvoSwitch enables global and local customers to build their IT infrastructure for growth, creating value for customers and partners alike offering 14.000 m2 and ample room for further growth on both sides of the Atlantic.

Webinar – Encryption as a Service: Key to Ensuring Cloud Security and Compliance