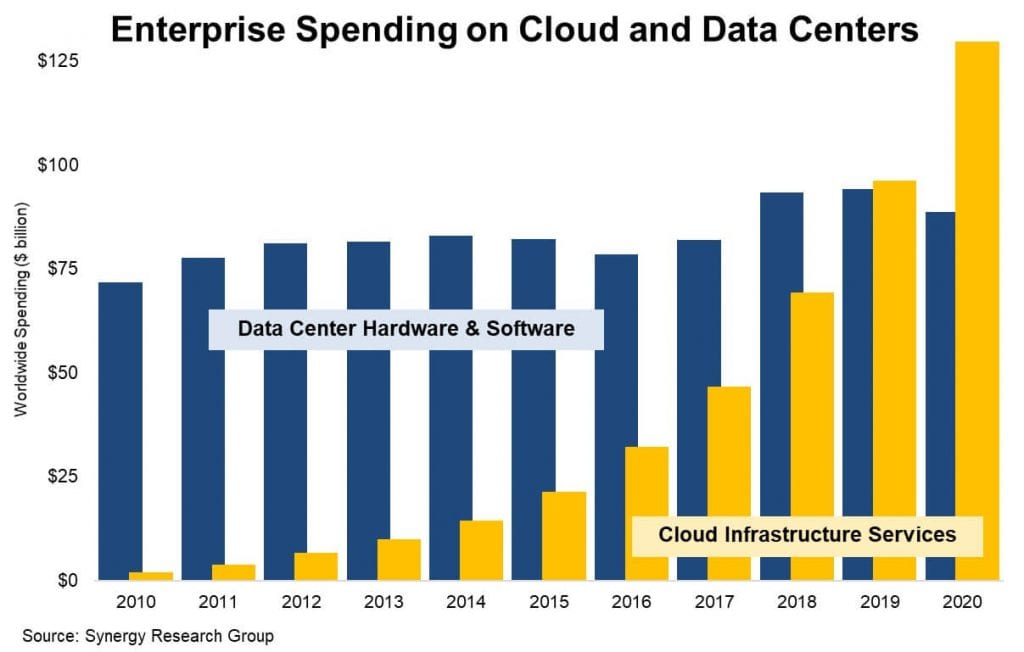 It means that cloud spending by enterprises has surpassed enterprise spending on on-premises data centers. It’s the result of a decade-long trend of explosive growth in cloud and virtual stagnation in the market for enterprise-owned data center equipment.

In 2019 the two markets were almost equal in size but in 2020 COVID-19 helped to further fuel this major shift in worldwide IT operations, according to Synergy Research. Over the decade, average annual spending growth for data centers was just 2% while for cloud services (IaaS, PaaS and hosted private cloud) it was 52%.

“Over the last ten years we have seen a dramatic increase in computer capabilities, increasingly sophisticated enterprise applications and an explosion in the amount of data being generated and processed, resulting in an ever-growing need for data center capacity,” said John Dinsdale, a Chief Analyst at Synergy Research Group. “However, 60% of the servers now being sold are going into cloud providers’ data centers and not those of enterprises.”

Within the $130 billion cloud infrastructure services market, the major segments with the highest growth rates over the decade were mainly within PaaS – especially database, IoT and analytics. According to Synergy Research, IaaS (Infrastructure as a Service) share of the total held reasonably steady while managed private cloud service share declined somewhat.

“When a company needs computing power to manage its data and to run its business apps, it can either invest in its own data center infrastructure or it can use cloud services provided by a public cloud provider,” added Mr. Dinsdale. “Clearly companies have been voting with their wallets on what makes the most sense for them. We do not expect to see such a drastic reduction in spending on enterprise data centers over the next five years, but for sure we will continue to see aggressive cloud growth over that period.”