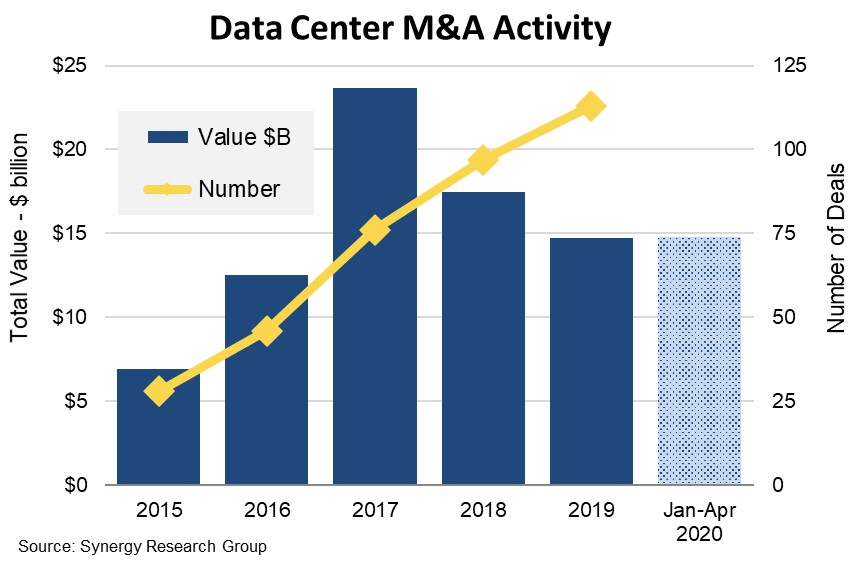 In the last four years the trend has been for the number of deals to increase sharply, while in the last two years the aggregate value dropped off due to a relative lack of mega-deals being closured. That situation has reversed in the first months of 2020, thanks in large part to the $8.4 billion acquisition of Interxion by Digital Realty, which is the largest ever data center transaction. Meanwhile two other billion dollar-plus deals have closed so far this year as well as two that were valued at over $500 million.

“This will be a bumper year for data center M&A activity,” said John Dinsdale, a Chief Analyst at Synergy Research Group. “In less than four months the M&A value has already surpassed 2019, in addition to which we are aware of 17 more agreed deals that are pending closure plus a few other potential multi-billion dollar deals. What is causing this surge in M&A? Outsourcing trends and the aggressive growth in cloud services are driving ever-growing demand for data center capacity, which in turn is fueling both industry restructuring and a need to find new sources of investment capital.”

Since the beginning of 2015, Synergy Research has identified 388 closed data center M&A deals with an aggregated value of $90 billion. Over the period, the aggregated deal value has been split equally between public companies and private equity buyers, while private equity buyers have accounted for 57% of the deal volume. Since 2015 the largest deals to be closed are the acquisitions of Interxion and DuPont Fabros by Digital Realty, the acquisition of Global Switch by a group of Chinese investors and the acquisitions of Verizon data centers and Telecity by Equinix.

Over the 2015-2020 period, by far the largest investors have been Digital Realty and Equinix, the world’s two leading colocation providers. In aggregate they account for 35% of total deal value over the period. Other notable data center operators who have been serial acquirers include CyrusOne, Iron Mountain, Digital Bridge/DataBank, NTT, GI Partners, Carter Validus, GDS, QTS and Keppel.

Logicalis Acquires NubeliU to Strengthen its Position as Cloud Integrator

What is marketing automation and how to use it | 123-reg