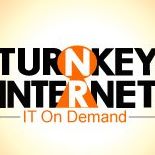 “These Deca-Core CPU’s offer significant performance boosts over previous processors,” said Brian Ellwood, TurnKey Internet’s Operations Manager. “There are multiple Raid 10 SSD disk arrays and multiple Deca-Core CPU’s in each node. This is the most innovative, highest-performing node configuration on the market, and a ground-breaking alternative to the other public cloud and VPS options out there.”

How to enable and configure automatic backups on your WHM server

The computer becomes the network